INFOS
You Are Here: Home » Archives » Africa commits to the value of its patrimonial food

Africa commits to the value of its patrimonial food

Posted by :Cerdotola Posted date : 29 May 2017 In Archives, Cameroon Office, Country office, Hot news, Offices, Programs, Projects, The Executive Secratary Comments Off on Africa commits to the value of its patrimonial food 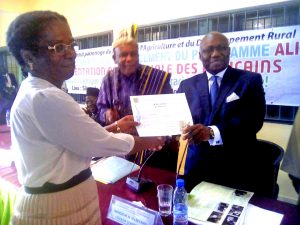 The curtain has come down this Friday 26th May, 2017 on the international launching workshop of the program “African patrimonial food” that took place in the CERDOTOLA’s command post of Yaoundé.

Everyone was satisfied at the end of the international launching workshop of the program “African food heritage” (ALIPA) that took place in Yaoundé from May 24th to 26th 2017. During three days the efforts of this workshop have allowed the experts, researcher, traditional authorities and Government members to think about new strategies through 31 articles in order to encourage Africans to consume African products.

Professor Ngah Esther, the coordinator of the ALIPA program specifies that the goal of this workshop was to “make a situational analysis of African food heritage, to consider where we stand because some African traditional dishes tend to disappear. Thus, we want to make an inventory of what we still have as dishes and define them in order to put them available of communities for a better preservation, value and transmission of this heritage”.

The works of this atelier ended on a round table on the topic: “shall we be afraid of the disappearance of knowledge and African food customs? Trails and perspectives of researches”. Moderated by the Executive Secretary of CERDOTOLA Professor Charles Binam Bikoi, this round table has permitted a collective commitment for a better value of African food heritage.

In his closing speech, the Executive Secretary of CERDOTOLA has thanked the participants of this workshop for the accomplished work in the framework of the value of food heritage. He has also said that the APF program is the new beginning for CERDOTOLA which this year, will celebrate its 40th anniversary. He has also expressed the wish through the ALIPA program Africa will be able to feed itself with its cultural identities in order to put down the roots of its emergence.